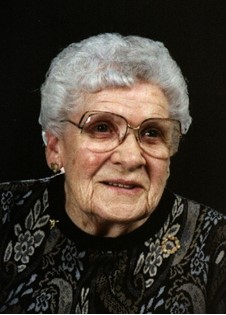 Guestbook 2
Irene Mary Sondgeroth of Riverton died Friday afternoon, May 23, 2008, at Wind River Health Care in Riverton. She was 94.

There will be no local services. Mrs. Sondgeroth’s body will be returned to O’Neill, Neb., for graveside services at the nearby Scottsville Cemetery, through Biglins Mortuary.

She was a 13 year resident of Riverton.

Irene Mary Williams was born in Bonesteel, S.D., on April 11, 1914, the daughter of James H. Williams and Mary (Haver) William, the youngest of eight siblings. She grew up in Bonesteel where she was graduated from high school.

Mrs. Sondgeroth moved to Riverton in 1989 after the death of her husband in Pinedale.

She had lived in Holt County, Neb., where the family farmed.

A homemaker, Mrs. Sondgeroth worked for the R.E.A. in Bonesteel, S.D. She did the bookkeeping and secretarial work for the plumbing business run by her husband, Walt’s Plumbing in Pinedale.