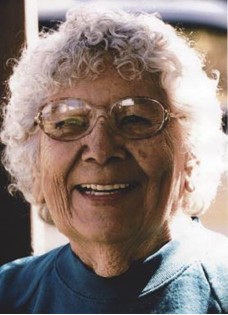 Guestbook 1
Frances Apodaca Coates, age 95, passed away June 18, 2017 at her home in Grand Junction, CO. She moved to CO in October 2016 to live near her daughter, Anita Green. Frances was born July 25,1921 in Antonito, Colorado to John & Patrocinia (Herrera) Valdez. She moved to Riverton as a young girl. She married Pete Apodaca Sr. and they raised their family in Riverton. Frances was an excellent cook and worked at many local restaurants, Ben's Super Market Bakery, West Main Dash-In, and also worked as a cook at the V.F.W. She returned to school when her children were grown and received her high school diploma. Mrs. Coates was a member of St. Margaret's Catholic Church, a life-time member of the Fraternal Order of the Eagles Auxiliary, Veteran's of Foreign Wars. She served as President of the Women's Auxiliary in the 1960's. She was also a member of the Riverton B.P.O.E. Lodge. On June 3, 1971 she married Robert J. Coates in Casper, Wyoming. They moved to Modesto, California. She worked at Modesto Bowl as a cook. After several years they returned to Wyoming. They worked at the Farson Oregon Trail Cafe & Bar in the early 1980's. Her interests were spending time with family and friends. In her younger years she loved to bowl and was on bowling leagues in California and Wyoming. She was on a Dart team in Riverton and Lander. She enjoyed going to the casino, doing word search puzzles, electronic games of Yahtzee and Poker. She loved playing the Yahtzee board game with her grandchildren. Her favorite television shows were Game shows, Everybody Loves Raymond, and especially Westerns. She loved the Denver Broncos and was a big fan, she always wore her lucky Denver Logo socks on game day. Her favorite color was red and they always laughed at her because she liked to coordinated the color of her sweat shirt with color of her socks. She was an avid reader and kept up on political issues and voted in every election. Frances looked forward to weekly visits by the 3 T's, Tina, Tracey, and Tricia who adopted her as their own. Survivors include daughters, Barbara (Denny) Preville, Anita (Wayne) Green, Cathy (Max) Longtine, step-daughter, Shayne Coates; Sons, Pete, Leroy, Richard, and Larry Apodaca; 28 grandchildren, 54 great-grandchildren, 3 great-great-grandchildren and numerous nieces & nephews. She was preceded in death by daughters; Janice Lynch McCarty, Rachael Almond, Yvonne Anderson, and infant daughter Georgia Apodaca, step-son Dan Coates, daughter-in-law Luisa Apodaca, son-in-laws Robert Buttars Sr., Lewis Almond, Parents, husbands Pete Apodaca Sr. and Robert J. Coates. Frances was the last survivor of her siblings, brothers; Tom, John, Clyde, and Frank Valdez. Sisters; Mary Montoya, Fannie Cisneros, Jennie Apodaca and Josefina Moreno. 5 grandchildren, Bob Buttars Jr., Tony Green, Monica Green, Christopher Apodaca, Richard Scott Apodaca, and 1 great-granddaughter, Zoe S. Brown. Funeral Mass for Frances Coates are Friday, July 28 at 10:00 a.m. at St. Margaret's Catholic Church in Riverton. Burial at Mountain View Cemetery. Reception to follow at St. Margaret's Gym. On-line condolences may be made to the family at www.TheDavisFuneralHome.com