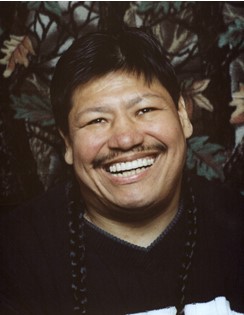 Guestbook 1
Funeral Mass for Jerome G. Gambler, Jr., of Lander will be at 10 a.m. Wednesday, June 4, at St. Stephen's Catholic Church. The Rev. Father Bill Garrett will officiate. Interment will follow at the Arapaho Catholic Cemetery at St. Stephen's. There was a rosary Monday evening at the Davis Funeral Home with a second rosary scheduled for 7 p.m. Tuesday, June 3, at the home of Francine Lonebear, 865 Rendezvous Road, Arapahoe. A wake will follow. Mr. Gambler died on Saturday, May 31, 2008, at the Wyoming State Training School in Lander, where he had made his home since the age of 11. He was 44. Jerome Gerald Gambler, Jr., was born in Riverton on Feb. 11, 1964, the son of Jerome Gerald Gambler, Jr., and Marie Ann Moss. Mr. Gambler was a member of the Catholic faith. His family said he liked going home for visits, bowling, fishing, looking through catalogues, enjoyed his family and the staff at the Training School, and was a fan of the Denver Broncos football team. Survivors include a brother, Ryan Gambler, Sr., and his wife Marilyn; sisters, Francine Lonebear and husband David, Annette Shakespeare and husband Delmont, and Salome Blackburn and husband Ricky Blackburn, Sr.; uncles, Leonard Moss, Jr., and his wife Violet, and George Moss and his wife Eunice; an aunt, Alberta Lee; numerous cousins, nephews, nieces, and other family. He was preceded in death by his father, Jerome Gambler, Sr.; mother, Marie Moss; brother, Tater Moss; grandparents, Clarence and Edna Moss, George and Salome Gambler, Herman and Eileen Moss, Margaret Spoonhunter, Rita Lee; uncles, Pat Behan and Lawrence and Charles Gambler; numerous other aunts, uncles, and grandparents. On-line obituaries are available and condolences for the family may be made at: thedavisfuneralhome.com Services are under the direction of the Davis Funeral Home of Riverton.