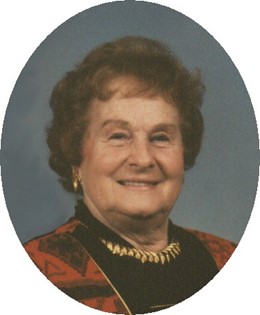 Mary Kathleen “Tiny” Regan was born Mary 22, 1927 in Faith, SD, the daughter of Dan Regan and Agnes (Quinn) Regan. She resided in Faith and Sturgis in her younger years. She attended St. Martin’s Academy in Sturgis and Black Hills State Teachers College in Spearfish.

On August 20, 1947 she married Glenn Burgess. They lived and worked in Deadwood, Gregory, Belle Fourche and Rapid City, SD before moving to Riverton in 1959, where Mr. Burgess coached and taught in the Riverton schools. In 1973 they moved to Billings where he was director of the Vocational Education Center. They returned to Riverton in 1980, with Mr. Burgess being an administrator at Riverton High School. They moved to Sheridan in 2005.

She was a homemaker, and a para professional at Ashgrove and Riverton Middle Schools, and Lewis & Clarke Junior High in Billings.

The family said Mrs. Burgess loved music, playing for many groups in South Dakota. She also enjoyed crafts, sports, hunting, camping and family activities. Mr. and Mrs. Burgess traveled many miles to watch children and grandchildren in their various activities.

Mrs. Burgess was preceded in death by her husband on March 26, 2006, and her parents.

Memorial donations may be made to St. Margaret’s School Foundation or Alzheimer’s Wyoming, in care of Davis Funeral Home, 2203 W. Main, Riverton, WY 82501.