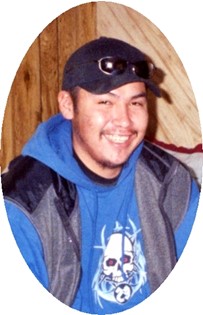 Guestbook 1
Charles “Chuck” Dodge, III, his Indian name is, Nooti nei nen “Sioux Man”, 36, of Arapaho passed away on Thursday, November 30, 2017. A rosary will be recited at 7:00 pm on Wednesday, December 6, 2017, at Great Plains Hall with the wake to follow at 35 Great Plains Loop. The funeral service will be held at 10:00 am on Thursday, December 7, 2017, at Great Plains Hall with burial to follow at the Arapaho Catholic Cemetery in St. Stephens.

Charles Joseph Dodge, III was born April 7, 1981 in Lander, WY to Charles and Carolyn (Wanstall) Dodge, Jr. He grew up on the Wind River Reservation and the Arapaho Ranch. He attended school at St. Stephen’s and earned his G.E. D.

He practiced the traditional Arapaho Ways.

When he was fourteen he went to work at the Arapaho Ranch and worked there on and off until his passing.

He was a Sho-Rap firefighter and volunteered in New Orleans and Florida when the hurricanes, Katrina and Wilma, devastated those areas.

He was a caretaker for his Dad. He liked helping his family and friends, was really good with kids, especially his nieces and nephews. He also liked working with horses and helping his grandfather take care of his horses and also help other people. Charles loved being outdoors and was always assisting other people be it fencing, cleaning yards, or working with their livestock.

He was preceded in death by grandparents, Charles Sr. and Jessie (Backward) Dodge, royal and Viola (Oldman) Wanstall; and numerous other family members.