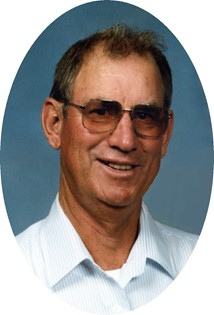 Guestbook 5
Ronald “Ron” Collinson, 89, of Riverton passed away on Wednesday, December 13, 2017, at the Sage West Hospital – Riverton. Services will be at 2:00 pm on Friday, May 18, 2018, at Davis Funeral Home. Inurnment will follow at Mountain View Cemetery with military honors.

Ronald Keith Collinson was born on February 23, 1928 in Wynot, NE to Irvin Winfred and Marion (Anderson) Collinson. He grew up in Crofton, NE with his four brothers and six sisters. He graduated from High School in 1945.

Ron was of the Episcopal faith and attended St. James Episcopal Church in Riverton.

After graduation he enlisted in the U.S. Navy and served from 1945 to 1949. He was a Radar Man with the shore bombardment and helped “guard” the Atomic Bomb Test in 1948. He was honorably discharged but returned in 1951 to 1952 serving in Korea.

Before he went to Korea he married the love of his life, Sadie Marie Doukas, on April 28, 1951. They met in Gothenberg, NE where she was raised and they married in Lexington, NE. After returning from the service, they lived in Nebraska until 1954 when they moved to Riverton, WY. It became their forever home and where they raised their daughter, Deanna. They shared over 60 years together before Sadie passed in 2012.

After moving to Riverton, Ron worked for Sinclair as a maintenance man at both plants. He then worked for a short time in the Gas Hills before going to work for Pacific Power and Light in 1960. He was the “Material Man” at the warehouse and read meters for about five years. On his 62nd birthday he retired after 30 years of service.

He was a lifelong member of the Veterans of Foreign Wars in Riverton.

He enjoyed hunting, fishing and all types of sports. He never missed a Riverton football or basketball game and could be seen cheering on the teams no matter what. He loved to follow his grandchildren all over the state in their events and was their biggest fan.

He is survived by his daughter, Deanna Rae Nolting and husband, Dean of Riverton; granddaughters, Dawn Mascarenaz and Jamie Berger of Rock Srpings; and great grandchildren, Karley Lang, Sadie Berger, and Jace Berger.

He was preceded in death by his parents, Irvin and Marion Collinson; wife, Sadie Collinson; and four brothers and six sisters.