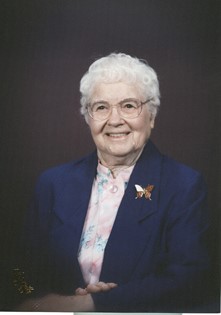 Guestbook 0
Former Fremont County resident Elsie F. Hastings died on Tuesday, June 10, 2008, at the Life Care Center of Casper. She was 96. Funeral services will be at 1 p.m. Saturday, June 14, at the Davis Funeral Home of Riverton. Interment will follow at Mountain View Cemetery in Riverton. Elsie F. Higgins was born on Aug. 9, 1911, in La Junta, Colo., the daughter of James and Lessie Higgins. After being graduated as valedictorian from La Junta High School, she attended Phillips University in Enid, Okla., where she was graduated with a Bachelor of Arts degree in education. In the early 1930s, she taught junior high in Elk Mountain. While there, she met Richard "Dick" Hastings and they were married on May 25, 1937. They spent 56 years in Riverton and Dubois where they owned and operated Hastings Plumbing and Heating. When Mr. Hastings died in 1994, Mrs. Hastings moved to Nampa, Idaho, to be near her son, Robert. Her family said Mrs. Hastings enjoyed cooking, sewing, and gardening. They said, "She could out-fish her grandchildren" but made it up to them by baking cookies. Mrs. Hastings returned to Wyoming in May of 2004 to be nearer her daughter, Dixie, grandchildren, and great grandchildren. She made her home at Garden Square Assisted Living and was a member of Calvary Baptist Church in Casper. She had been a Sunday School teacher at the First Baptist Church in Riverton, participated in Child Evangelism Fellowship, and Gideons Auxiliary. She was also a member of Berean Baptist Church in Nampa, Idaho, and helped there with Awana and Missionary Helpers. Mrs. Hastings is survived by her son and his wife, Bob and Kathel Hastings of Boise, Idaho; her daughter and husband, Dixie and Rich Blower of Casper; grandson, Randy Blower of Denver, Colo.; granddaughter and her husband, Kelsee and Mark Miller of Casper; great grandchildren, Ethan and Kadynse Miller of Casper. She was preceded in death by her parents; her husband, Richard "Dick" Hastings in 1994; her brothers, Rolland and Don Higgins, and her sister, Verna Bullard. Memorials may be made to the Child Evangelism Fellowship or Gideons International, in care of the Davis Funeral Home, 2203 West Main, Riverton, WY 82501. On-line obituaries are available and condolences for the family may be made at: thedavisfuneralhome.com Services are under the direction of the Davis Funeral Home of Riverton.