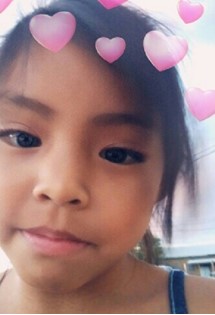 Evalette RaeDawn Tillman was born June 13, 2011 at Lander Regional Hospital to mother, Toni Tillman and father, Dustin Maldonado, Sr. She lived in the Riverton area with her parents and brothers for most of her life. She attended Aspen Early Learning Center for her kindergarten year then for her first grade year she transferred to St. Stephen’s Elementary School.

Evalette enjoyed spending time with her two younger brothers and all her sisters, family and friends. She liked swimming, taking selfies, snap chatting, making and watching YouTube videos, playing roblox, My Little Ponies, Littlest PetShop, Shopkins, and Monster High. She was always helpful especially with her brothers, she was considerate of others, she had a kind heart, she was playful and energetic, and she loved to play pranks on her mom and grandma. Evalette was always full of life and she never left home without her smile.