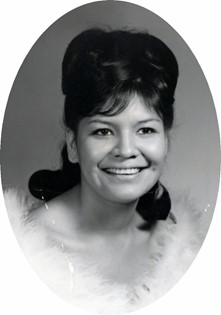 Eleanor Jean Watt was born January 15, 1949 in Fort Washakie, WY to William and Elma (Smith) Spoonhunter. Her Indian Name was Notoone’ – “My Daughter”. She attended schools in Arapahoe and graduated from Lander Valley High School.

She was baptized into the Catholic faith and was a faithful member of St. Stephen’s Catholic Church.

On November 4, 1967 she married William “Bill” C. Watt in Daly City, Calif. Bill was in the U.S. Air Force so they lived in many different areas including Spokane, WA, Colorado Springs, CO, Honolulu, HI, Vandenberg Air Force Base in Lompoc, CA, Peru, IN, Berminhamin, Germany, Hessich Oldendorf Germany, and Albuquerque, NM before moving back to the Wind River Reservation area on May 1, 1994. She remained in the Wind River Reservation area until her passing.

She worked for many years as the Religion Education Coordinator at St. Stephen’s Catholic Church and in recent years she worked at the Wind River Casino as an Espresso Maker.

She enjoyed playing Bingo, going to the Casino, listening to Jim Felix, and shopping at thrift stores. Above all she loved spending time and cooking for her children and grandchildren.