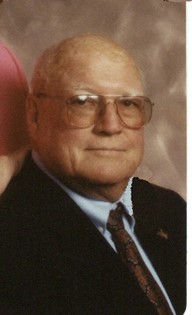 Guestbook 2
Robert "Bob" Dewayne Eells, 82, of Riverton died with his family by his side on June 28, 2008 after a valiant eight year battle with cancer.

Services will be held at 10:00 a.m. Thursday, July 3, 2008 at Davis Funeral Home with his neice Dana Fanning officiating.

He was born on November 20, 1925 in his grandmother's house in Gothenburg,Nebraska, to Roy Jacob and Mahala "Hala" Susan (Granger) Eells.

Bob grew up in Gothenburg. He moved to Missouri Valley with his parents in 1940 and spent their first Wyoming winter in two tents. They bought 80 acres of sagebrush land that the BLM had just irrigated so that the land could be farmed.

He graduated from Shoshoni High School in 1943. He joined the U.S. Army in December of 1943. He served with the 315th Bombardment Wing and enjoyed their yearly reunions. He considered it an honor and privilege to have served his country.

He worked for Hugh Day, then the Chevrolet garages in both Thermopolis and Riverton. In 1967 Porter Chopping started Chopping Motor Lease with Bob working with him. He bought Porter out in 1980. Chopping Motor Lease continues to be a family business run by his son-in -law Mark and grandson Brandon.

He and his wife loved to travel, camp fish, garden and spend time with their family and many special friends. He was a member of the Wyoming Trucking Association, VFW and lifetime member of the B.P.O. Elks.

He enjoyed woodworking and made many beautiful heirlooms for his family.

He was preceded in death by his parents and brother, Kenneth Eells.