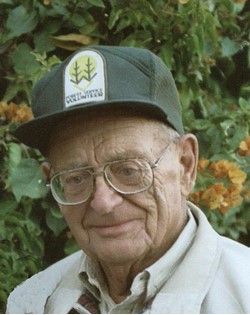 He grew up in Beloit, attending schools there, and living there for 23 years. The next 37 years were spent in South Beloit, IL. Since his retirement, Mr. and Mrs. Hansen wintered in Yuma, AZ and summered in Dubois, WY.

Mr. Hansen was a Merchant Marine during World War II.

He was a member of St. John’s Lutheran Church.

Mr. Hansen worked for Wisconsin Power and Light Company in Beloit, WI for over 40 years, where he spent 20 years each as an operator and a laboratory technician.

He was a member of the NRA, IBEW and was a Shoshoni National Forest Service volunteer and campground host for the past 21 years.

Mr. Hansen was preceded in death by his parents, Elmer and Winnifred Hansen and a grandson, Brian Paris.

Memorial donations may be made to the Dubois Ambulance Service, the Humane Society or the Dubois Senior Center, in care of Davis Funeral Home, 2203 W. Main, Riverton, WY 82501.