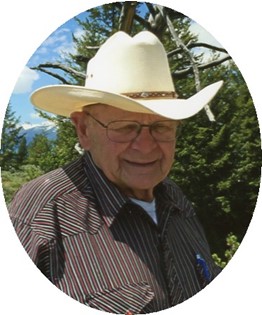 Funeral services will be held at 10:00 a.m. Monday, July 16, 2018 at the Davis Funeral Home in Riverton. Interment of ashes will be at Mountain View Cemetery.

Wesley was born in Wheatland, WY on May 2, 1931. His parents were Carl and Minnie Good. He lived with his family in the Chugwater, WY area and graduated from Chugwater High School. He shared many stories about working for neighborhood ranchers during that time and told personal accounts of the infamous Blizzard of '49. He and his family moved to Riverton, WY soon thereafter.

He married Cleta Thomison on May 27, 1950 in Riverton, WY. At that time, Wesley worked at the family business, Good’s Oil Company, delivering fuel to rural farmers. He and Cleta also farmed north of Riverton where he enjoyed raising Charolais cattle. He was always willing to lend a helping hand to other cattlemen and truly loved the hard work of being a cowboy.

Wesley was later employed by Pacific Power & Light as a meter reader and drove truck for the line crew. After retirement from the power company and selling the farm, Wes and Cleta moved to Dubois, WY where they spent the summer months fishing and enjoying the high country. They were snowbirds and spent the winter months at their place in Jakes Corner, AZ. They were also fortunate to make a couple of summer trips to Alaska.

Wesley enjoyed the outdoors and was an avid hunter. He took many elk hunting pack trips into the Wind River Mountains and passed his love of the sport on to his children and grandsons. He also enjoyed reading and visiting with anyone who had a few minutes to share. His Scottie dog, Aggie was a constant companion.

He was a Master Mason of Riverton Lodge No. 26.

Wesley was preceded in death by his parents and by his wife, Cleta, in 2010.

He is survived by a brother, Carl Good of Cheyenne, WY and by his children. They are: daughter, Teri King and husband Roger of Tonto Basin, AZ and sons Raymond Good and wife, Ladonna and Curtis Good and wife, Kim, of Riverton, WY. Also surviving are six grandchildren: Collette Bracken, Cody King, Courtney Ladenburger, Levi Good, Abby Arriaga, and Travis Good, as well as six great-grandchildren.

On-line condolence for the family may be made at www.TheDavisFuneralHome.com.