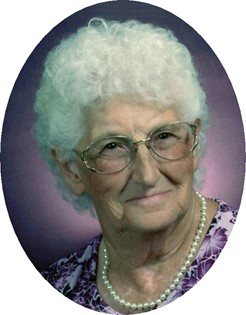 Guestbook 11
Funeral services for Bonnie Mae Stickney, 89, will be held at 2:00 p.m., Saturday, September 1, 2018 at Davis Funeral Home with Dick Pattison officiating. Burial will follow at Mountain View Cemetery. A Viewing will be held from 1:00 p.m. until service time Saturday.

She was born on her family ranch 9 miles south of Gehring, NE on February 2, 1929, daughter of George G. and Mabel O. (Rickel) Selby.

In 1945, Bonnie married Waldo Morris in Scottsbluff, NE. In 1947, the couple moved to Pavillion and later to Lander in 1960. Bonnie lost Waldo in a car accident in October 1966 and on September 16, 1967, she married Clifford Stickney at the Trinity Lutheran Church in Riverton.

Bonnie began working as a waitress at the age of 14 in Scottsbluff and later in Lander. Bonnie and Waldo farmed in both Scottsbluff and Pavillion. She also worked at the Pavillion School for 19 years with her husband, Clifford, while also serving as caretaker at the Pavillion United Methodist Church cleaning inside the church and taking care of the lawn outside for many years. Bonnie loved her time raising her family and being a farmer’s wife. She enjoyed spending time at the Grange during dances, dinners, attending meetings and representing the club on the state level.

She was a member of the Pavillion Community United Methodist Church and attended the Cornerstone Community Church.

Memorials may be made to Pavillion Recreational Center in care of the Davis Funeral Home, 2203 W. Main Street, Riverton, WY 82501.