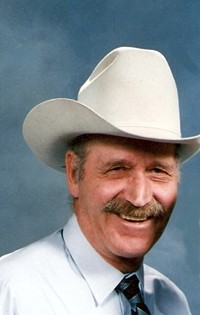 Guestbook 3
Kenneth Dallas Meyers died at his home Monday morning, July 7, 2008, at the age of 73. Memorial services will be at 10 a.m. Saturday, July 12, at the Davis Funeral Home of Riverton, with inurnment at Mountain View Cemetery in Riverton. Kenneth Dallas Meyers was born in Ekalaka, Mont., on Jan. 31, 1935 to Edward H. and Mabel Meyers. He and his twin sister, Cathy, had eight brothers and sisters. At the age of 14, he caught a ride on the mail truck and traveled to his older sister's home in South Dakota. There he earned his way by breaking horses and cowboying for various ranches. Mr. Meyers eventually made his way to Casper where he met his future wife, Celia Jo Arnold. They were married in Billings, Mont., in 1953. After the wedding, he hurried back to round up where he trailed cows from the Sanford ranch to Powder River where the cattle were loaded on a train. His family said Mr. Meyers was mechanically inclined and that led into a career change in the mining industry. The family followed the boom industry throughout the state of Wyoming, one year in Idaho, and 10 years with a copper mine in Arizona, previously the Cyprus Mine, where he refined his skills and earned credentials as a master mechanic, finally retiring to Riverton in 1997. His family said Mr. Meyers was a self-taught man who was devoted to his family. They said he loved to help with brandings, take pack trips in the mountains and go hunting and spending time with his children and grandchildren. Survivors include his wife of 55 years, Celia Jo; daughter, Kenna Jo Horton and husband Gary, and their children Justin, Cole and Leena; daughter, Anel Brodie of Lander and husband Chuck and their daughters Amanda and Jessica; daughter, Brenda Davis and her children, Shara and twin brother Isaiah, Kylie, and great-grandson Tommy; son, Scott Meyers and wife Sheri and their children Zack and Allanah of Riverton; brothers, Lawrence of Casper, Walter of Alger, Wash., Clyde of Albuquerque, N.M., and Royal of Roy, Wash.; sister, Stella Wilkey of Bozeman, Mont., and twin sister Cathy Cureton of Kalispell, Mont.; aunt, Ruth Benjamin of Miles City, Mont., and numerous nieces and nephews. He was preceded in death by his son, Cecil Dallas "Casey" Meyers, his parents, one brother, and two sisters. Memorials may be made to Little Wind Hospice or a charity of the donor's choice, in care of the Davis Funeral Home, 2203 West Main, Riverton WY 82501. On-line obituaries are available and condolences for the family may be made at: thedavisfuneralhome.com Services are under the direction of the Davis Funeral Home of Riverton.