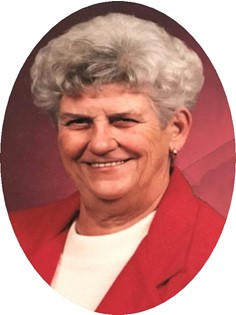 Gloria Carrigan was born on November 11, 1932 in Peoria, IL to Thomas Michael and Elsie Fredricka (Trumpeter) Carrigan. She was raised in Peoria with her two brothers and three sisters.

Gloria was baptized into the Catholic faith and was a member of Holy Rosary Catholic Church in Lander. She was also a member of St. Anne’s Alter Society.

On February 3, 1951 she married Benjamin Owen Moss in Peoria, IL. They moved to Thermopolis in 1952 and then to Lander in 1962 where they raised their five children. She was a homemaker and also worked side by side her husband in their grocery business, Ben’s Supermarkets. They had stores in Thermopolis, Riverton and Lander from 1952 until 1984. They were married for 58 years before Ben passed in 2009.

Gloria enjoyed traveling and being around her family and lots of friends.

She was a member of Epsilon Sigma Alpha (ESA) and was the local and state past president. She also belonged to the BPO Does in Lander where she was a past local president.

Memorials may be made to Torrington Childrens Home in care of Davis Funeral Home, 2203 West Main Street, Riverton, WY 82501. On-line condolences may be made to the family at www.TheDavisFuneralHome.com.

Services under the direction of Davis Funeral Home,