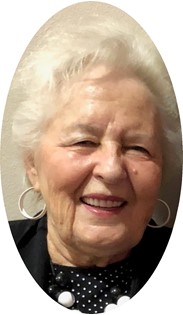 
Janet Hackleman, 83, passed away peacefully on Tuesday November 27, 2018 after suffering from a major stroke on Saturday, November 24, 2018.

A Memorial service will be held at 2:00 p.m., Saturday, December 1, 2018 at Davis Funeral Home with Pastor Matt White officiating. Interment will follow at Mountain View Cemetery.

Janet Lee Cook was born on November 30, 1934 in Zion Illinois. She was born to Glen and Helmi “Peggy”(nee Koski) Cook. Janet had 4 sisters (Glenda Steinhoff, Shari Hancock, Jane Baldwin & Debbi Gardner). Her family moved to Alt Colorado where she met her future husband, James Darrel Hackleman known as” J.D.” After a whirlwind courtship they married on September 29th, 1950. Their first child, Lee, was born in Colorado and their subsequent children Peggy, Lori, and Barry were born in Wyoming. They moved to Wyoming to pursue J.D.’s dream of farming. Within a couple of years the young couple were able to purchase land on Riverview where they farmed and raised a family. After many years of being a homemaker and helping J.D. farm, in 1977 Janet went to work in retail clothing for many years. She would move on to work at Wyoming Senior Citizens, Inc with the statewide WSHIIP program for seniors as a Program Manager in 1995 until she retired in 2009.

Janet had a keen mind and was an avid reader of all types of books and magazines with a good memory for trivia. She was stylish until the end (particularly her hair and jewelry!). She was very talented artistically and enjoyed multiple crafts over her lifetime. She joined the Riverview Extension Club in 1956 and was a member for 52 years until the club disbanded. She made many lifelong friends and enjoyed contributing to the community.

Janet’s greatest love though was her family. She was proud of and loved each and every one of them. Her family’s loss of their Mom, Grandma and Sister will be felt forever.

J.D. passed away in 2010, 3 months after their 60th wedding anniversary. She mourned the loss of her lifelong love and partner keenly for the remaining 8 years of her life.

In lieu of flowers, memorials can be sent to Wyoming Senior Citizens, Inc in memory of Janet Hackleman.