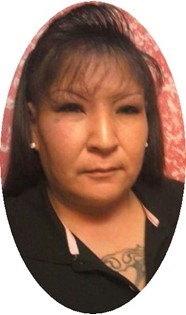 Guestbook 4
Funeral mass for Anna Juleen Bell, 46, will be held at 10:00 a.m., Friday, December 7, 2018 at St. Stephen’s Catholic Church with Father Jim Heiser officiating. Interment will follow at the Arapaho Catholic Cemetery. A Rosary will be recited at 7:00 p.m., Thursday, December 6th at Great Plains Hall with a wake to follow.

Ms. Bell passed away on December 3, 2018 at Help for Health Hospice Home.

She was born on January 22, 1972 in Riverton, Wy, daughter of Patrick Leonard Brown, Sr. and Julia Rose Oldman.

Anna enjoyed going to the casino, cooking for her family, cleaning, and playing with her grandkids.