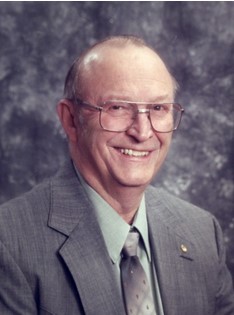 Lewis Gene Maulik was born on October 5, 1933 in Riverton, WY to Archie Lewis and Laura (VanDell) Maulik. He was a lifetime resident of Riverton, WY with the exception of the two years he was in the U.S. Army. He graduated from Riverton High School.

Lew joined the U.S. Army and served during the Korean War as a gun mechanic in an artillery battery at Camp Hanford, WA. He was honorably discharged and returned to Riverton.

On May 24, 1953 he married the love of his life, Carol Olson in Riverton, WY. This last May they celebrated their 65th Anniversary. Together they had three children, Joyce, Doug, and Mitch.

Lew worked for the Bureau of Reclamation before he started working at Hoffman Electric on December 12, 1955. He learned the electrical business from the ground up and on January 1, 1973 bought the business for Howard Hoffman who was retiring. He continued to run Hoffman Electric until he “retired” and his son, Doug, took over the business.

He was a longtime member of the Riverton Chamber of Commerce, National Electrical Contractors Association, and the Board of Directors of Sertoma/Reach Foundation.

Lew enjoyed woodworking, carpentry and was an avid antique collector. Lew will always be remembered for his smile and walking hand in hand with his beautiful wife down Main Street.

He was preceded in death by his parents, Archie and Laura Maulik; and sister, Helen Bell and granddaughter, Mackenzie Salmon.