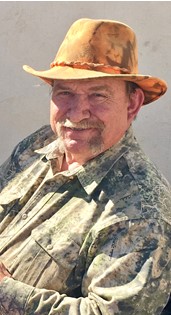 Robert Wayde Bulow was born on October 5, 1956 in Lander, WY to Robert Emil and Patricia (Hood) Bulow. He grew up in Lander, WY with his two brothers and two sisters. He graduated Lander Valley High School with the class of 1975. He then attended Central Wyoming College and earned his A.S. in Electrical Engineering.

He worked for thirty nine years at PerTech and worked his way up to Operation Manager.

He enjoyed hunting, fishing, camping, taxidermy and riding ATV’s. He was a man of many talents and could create something out of nothing. His most recent endeavor was forging knives. He wrote and published six (6) books including a children’s book, mountain man novels, and fantasy novels. His favorite time of the year was fall and the hunting camps when everyone was together.

He was preceded in death by his father, Robert Bulow; wife, Deanna “Dee” Bulow; son-in-law, Alden Lanier; step-father, Andy Calvert; and his grandparents.

Memorials may be made to The American Cancer Society or to a local Hospice Foundation of choice in care of Davis Funeral Home, 2203 West Main Street, Riverton, WY 82501.