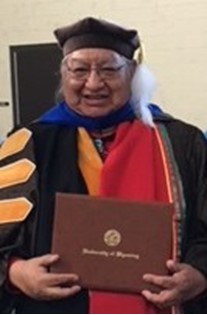 Dr. Burnett L. Whiteplume Sr. was raised on the Wind River Indian Reservation. He attended St. Stephens Indian School. Burnett graduated from Haskell Indian Junior College, Lawrence, KS, in 1964. Then attended Hartnell College, Salinas, CA, graduated with his A.A. Degree in Business in 1969. Burnett obtained his undergraduate degree a Bachelors in Business Administration at Washington State University, Pullman, WA in 1978. He obtained his Master’s Degree in Public Health from the University of Hawai’i at Manoa, Honolulu, HI in 1982. He continued his higher learning path to obtain his Doctor of Philosophy in Education with emphasis on Curriculum & Instruction at the University of Wyoming, Laramie, WY in 2017.

Dr. Burnett L. Whiteplume served as a member of the US Air Force and completed a tour of duty in Vietnam.

Burnett was an avid supporter of learning and encouraged his loved ones to pursue their education. Burnett’s doctorate emphasis was Curriculum and Instruction with projects which included a field trip to the Latin American country of Bolivia where they travelled to meet and work with the newly (at that time) elected President Evo Morales, of Bolivia. President Morales was the first Indigenous individual to be elected President where among his early administration initiatives was to design, develop and implement their public education system to be culturally relevant and sensitive to the Indigenous people of Boliva. Burnett met and got to know President Evo Morales through this project.

Dr. Burnett Lee Whiteplume, Sr. brought with him a wealth of knowledge of the Indian Self-Determination Act and Education Assistance Act of 1975 (Public Law 93-638) which authorized the Secretary of the Interior, the Secretary of Health, Education and Welfare and some other government agencies to enter into contracts with, and make grants directly to, federally recognized Indian tribes, of which he shared and worked to improve all tribal government services for the Northern Arapaho Tribe to assume their federal cost share of the Indian Health Service allocation which began Wind River Family Health Care. Burnett also brought knowledge of 3rd party billing which is utilized to generate revenue to sustain Wind River Health Care.

Burnett initiated a letter of intent to enter into a Gaming Compact with the State of Wyoming, following through with this endeavor, he submitted a letter of intent 3 times in good faith on behalf of the Northern Arapaho Tribe. With no response from the State of Wyoming after the 3rd request, under the authority of the Indian Gaming Regulatory Act, Northern Arapaho Gaming was established. The 789, Wind River and Little Wind Casino’s were established and are in operation generating gaming revenue for the Northern Arapaho Tribe.

Burnett was passionate about his work and a particular project among his favorite was Good Road of Life For Men. He met and worked closely with Clayton Small (Northern Cheyenne Tribe) whose dissertation thesis was Responsible Fatherhood. Burnett would help facilitate gatherings and secured a 5-year contract. He would facilitate focus groups. He was willing stand up, share those teachings, men coming together, sharing teachings, stories and healing. Making more commitments, young men who were divorced, got more involved with their families, and learned to be a more active parent. Burnett strong in our Native American Church would incorporate those teachings. Burnett along with Clayton Small and Sandor Iron Rope facilitated a Responsible Fatherhood Conference with 300+ in attendance.

Burnett was the drum keeper for the Eagle Society after the late Clark Trumball. This is a high honor given to Burnett by Arapaho Elders and this duty he strived to carry on and be at all Eagle Society functions. This honor Burnett held in utmost regard and strived to perform this role giving his best at all times.