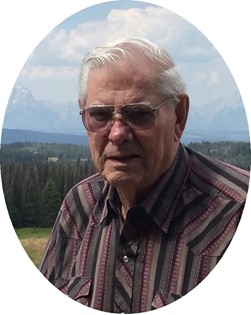 Guestbook 8
Clinton Edward Hanson, Sr. 95, of Lander, WY passed away at the Help for Health Hospice Home in Riverton on Sunday, March 3, 2019, with his family by his side. A memorial service will be held on Saturday, March 9, 2019, 11:00 a.m. at the Bethel Lutheran Church with Pastor Noah Fremer officiating. A reception will be held at the church following the service.

Clinton Edward Hanson was born November 1, 1923 in Dooley, MT to Herman Clarence and Norma Florence (Moore) Hanson. The family moved to Edmore, ND where Clinton was raised and graduated from Edmore High School excelling in sports, especially basketball. He joined the military service in 1943. On January 5, 1944, he married Myrtle Lorraine Myrvik in York, NE. The couple raised three sons.

He served in the U.S. Army Air Force from 1943 – 1945 and was trained as a weatherman. The couple moved many times as he was stationed at several different Army Air Force bases in the US. He was discharged in 1945 in Tyler TX. Clinton continued his professional career with National Weather Service (NWS) moving to Williston, ND in 1947. In March 1953, after six years in Williston, he transferred to the NWS station in Lander, WY. He chose the location based on looking at a map and seeing that it was surrounded by mountains. Clinton retired from the National Weather Service in 1978 after over 30 years of service.

As a younger man he played minor league baseball and basketball and once had the opportunity to play against the original Harlem Globe Trotters. He was an accomplished fisherman, even making the cover of the Wyoming Wildlife Magazine in 1976 while fishing the Little Popo Agie River below Red Canyon. He and Myrtle especially enjoyed camping in their RV, often at the Louis Lake or Falls Campgrounds. He enjoyed hunting deer, elk and antelope in the mountains and plains above Lander. Rock hunting was another interest and he found hundreds of pounds of jade around Jeffery City as well as agates and petrified wood at many locations. He did lapidary work and made many rings, earrings, belt buckles and bolo ties which he sold or gave as gifts to friends and family. Bowling was a lifelong passion. He bowled in the Wyoming State Tournament 50 consecutive years and in the Lander City Tournament 51 consecutive years. He also went to a few National bowling tournaments. Clinton served as the bowling league president for 19 consecutive years and in other officer positions for many years. He was inducted into the Lander Bowling Hall of Fame.

Memorials may be made to Bethel Lutheran Church in care of the Davis Funeral Home, 2203 W. Main Street, Riverton, WY 82501. On-line condolences for the family may be made at theDavisFuneralHome.com.