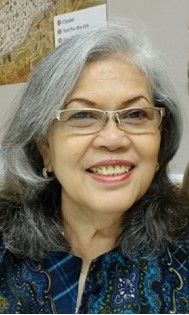 Rose was born on March 4, 1949 in Balikpapan, Indonesia, daughter of Albert and Wilhelmina (Salindeho) Lalisang.

Rose worked as an executive secretary for Royal Shell and Petro China in Indonesia.

Rose lived in Jakarta, Indonesia until she moved to the United States. On July 23, 2015, she married T.J. Noyes in Salt Lake City, Utah.

She enjoyed playing tennis and was also a member of the United Baptist Church in Riverton, WY.

Mrs. Noyes was preceded in death by her parents, brother, Robert Lalisang and sister, Christien Lalisang.