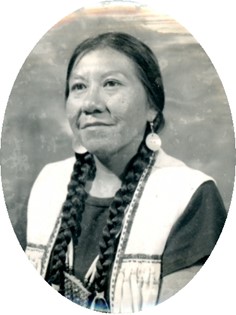 Guestbook 4
Funeral services for Helene Sharon Oldman, 80, will be held at 10:00 a.m., Wednesday, April 10, 2019 at the Shoshone Episcopal Mission with Pastor Roxanne Friday officiating. Interment will follow at Sacajawea Cemetery. A Prayer Service will be held at 7:00 p.m., Tuesday, April 9th

To all our friends and relatives far and near. It is with great sadness to tell you all that Newe Wy-pah (Indian Woman), Helene Sharon Edmo Bonatsie Oldman, passed away on April 6th, 2019. She had much traditional cultural knowledge of songs and language our women sang in the Eastern Shoshone Tribe. She was published in a book called "Song Prints" by Judith Vander. She sang with her family traditional drum group, the Crowheart Big Wind Singers, and was one of the few women that grass danced. She also traditional danced and ran for Miss Indian America when it was in Sheridan. She was the founder of the Fort Bridger Treaty Day Re-enactment event held at Fort Washakie with two others who have passed on. Born on August 6, 1938 she was a horse woman and talented beadworker living on her mom and dads Diamond 6 Ranch in Crowheart and educated to be a school teacher which she was for many years teaching at the Fort Washakie Headstart and Crowheart.

Historical Note: Her grandparents, Lucy Hills parents were Beaver and Queen Hill. Beaver Rim is named after Beaver Hill. Her dads father was Egan Bonatsie or Red Lake a Shoshone Scout that went out along the trails as the Tribe moved for their safety. He made the horse dance song to honor the horse and the Treaty on that day they signed it.