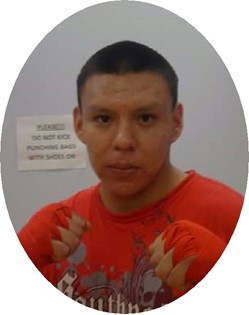 
Garen "Beesh" Sankey II, 28, died on April 20, 2019, from injuries sustained in a one vehicle accident on the Wind River Indian Reservation.

Beesh was born January 28, 1991, in Clinton, Oklahoma, to Nora and Garen Sankey Sr. However he spent most of his life residing on the Wind River Indian Reservation. He attended Wyoming Indian Schools in Ethete, Wy. Beesh was a member of the Northern Arapaho Tribe. He participated in traditional ceremonies. Beesh loved spending time with friends and family members, especially with his nephew's and neice's. During his early 20's, Beesh was an MMA fighter he enjoyed training with his adopted brother Craig Cordero. His hobbies included hunting, fishing cooking, horseback riding, singing, drawing and working out.

His humor was legendary, his smile unforgettable, his laughter was one of a kind, his kind, humble and compassionate spirit will be missed by many.