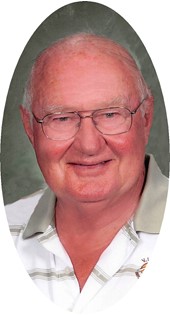 Harold L. Goetzinger was born in Creighton, NE on January 29, 1938, the youngest child of John and Kathryn (Gengler) Goetzinger. He attended and graduated from Plainview, NE schools. He lived with and was reared by his sister Arvilla and her husband, Louis Petersen from the age of ten through high school.

After graduation he spent two years in the U.S. Army after being honorably discharged he returned to Nebraska. He followed highway construction jobs for a short while.

On February 27, 1960 he married Elaine Mowry of Scottsbluff, NE. This union produced four children. They moved to Riverton in 1961 and he worked for Riverton Tire and Oil CO., Inc. of which he became part owner with Sam Stanbury, longtime friend and mentor. After his retirement in 1994, he sold his interest in RTO to Joe Stanbury.

After losing his wife of 31 years in 1991 he found love again with Karen Childers Gabrielsen a longtime family acquaintance and they were married on October 9, 1994. They were married for 16 years before Karen passed in 2010.

He was a life member of the Lions Club and Elks Lodge of which he served as a trustee for three years and served on the house committee many years. He was a two time recipient of the Elk of the Year honor.

Harold enjoyed following his children’s and grandchildren’s activities, fishing, playing poker, and after retirement he traveled and became a golf “nut” enthusiast.

As were Harold’s wishes no flowers for his funeral but instead to make a donation to one of the following organizations close to his heart, ABBA’S House, St. Margaret’s Catholic School, or Help for Health Hospice Home.