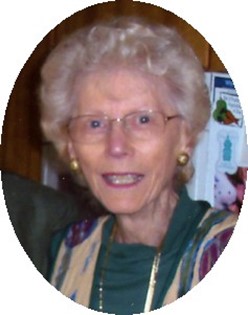 Diane was born July 20, 1928 in Independence, KS, to Clyde (Pete) Wahl, and Mary Edythe (Sheldon) Wahl. She graduated from Kansas State University in 1951 and married Wm F. (Bill) Porter. They lived in Junction City, KS, where she taught elementary school, and later in Ellinwood, KS where sons Dean and Kim were born. They were transferred to Alberta, Canada for several years, and then moved to Midwest, Wyoming, where son Jeff completed the family.

Moving to Riverton in 1959, Diane became a stay at home mom, but later worked as a teacher’s aide, and then taught nutrition through the University of Wyoming, in a mobile classroom on the Wind River Reservation.

She enjoyed traveling in the US and abroad, also including local explorations with the Wyoming Archaeological Society. In the meantime, she liked playing golf and bridge, gardening, and spending time with her family.

She is survived by her husband Bill, of Riverton, sons Dean of Arvada, CO, Kim of Hot Springs, AR, and Jeff of Grand Junction, CO. Also, granddaughters Kaylee of Ft Collins, CO, and Michelle of Laramie, WY, sister in law Beverly Wahl of Edmond, OK, and several nieces and nephews. She was preceded in death by her parents, brother Ben, and sister Eve. The friends she had in Riverton who have now passed on are too numerous to name.

A brief gathering in her memory will be held at the Davis Funeral Home on Friday, May 24, 2019 at 2:00 p.m. with Pastor Aaron McKee officiating.