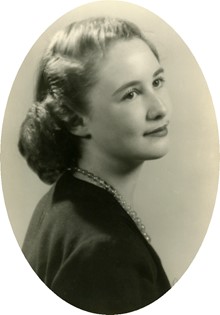 Guestbook 6
Amy Lou Brazil was born to Marjorie and Spencer Gard on December 2, 1931 in Iola, Kansas. The family moved from Iola to Kansas City, Kansas while Amy Lou was quite young. Amy Lou spent most of her childhood years in Kansas City attending elementary school there. The family returned to Iola, Kansas during Amy Lou’s teen years. They lived on a farm outside of town and Amy Lou raised cattle for 4 H projects. She loved the outdoors and living on the farm. After her High School graduation Amy Lou enrolled at the University of Wisconsin. During a visit back home from college she met her future husband, Jack Brazil. They were separated while Jack was called to serve in the Korean War. Amy Lou graduated from the University of Wisconsin with a degree in education. When Jack had returned from the war he and Amy Lou were married August 2, 1953. Amy Lou began her teaching career while Jack attended College to become a teacher. In 1954, Jack and Amy Lou had a son, Shane. They taught in several small towns in Kansas finally arriving in Wichita, Kansas in 1965 where they taught until retirement. Amy Lou taught over 3000 students in her 37-year career. She taught science at Hadley Junior High School for 30 years in Wichita. In 1965, Amy Lou and Jack met Bob and Fritzy Boedecker, from Lander, Wyoming. They became fast friends and the Brazils were invited to come and visit them in Wyoming. In 1966, the Brazils decided to take a vacation to Wyoming. Boedeckers introduced them to Double Cabin campground near Dubois, Wyoming and that is when Amy Lou and Jack fell in love with the area. Jack, Amy Lou and Shane spent several months every summer at Double Cabin. In the late 1970’s, Jack and Amy Lou were offered a position as campground host for Double Cabin and accepted. They hosted Double Cabin until 2002 when Jack suddenly passed away. Amy Lou continued to host the campground that summer. They had owned a home in Dubois since 1994 and made it their permanent residence, moving from Iola in 2002, just before Jack’s passing. Amy Lou became a fixture at the High Country Senior Center becoming well known and loved by many. In December 2018, Amy Lou was diagnosed with cancer and May 18, 2019 she lost her battle with cancer. Amy Lou was a true “rock hound” and made jewelry and other items from rocks she had found. She would walk for miles and spend hours searching for petrified wood. Amy Lou was also an avid traveler. In 1964 her parent’s treated the Brazil family to a trip to Alaska. Amy Lou and Jack later traveled with her parents to England, Ireland and Denmark. She took her Granddaughter, Melina, to Ireland, Peru and Hawaii. Amy Lou took another trip to Alaska with friends in 2015. Amy Lou made several trips across the United States as well as many shorter trips to different states. In 2018 Amy Lou took her final trips, to Florida, to Arizona and another to Hawaii. Amy Lou had always longed to go on a hot air balloon ride and one year, as a gift, her family granted her that wish. She said it was one of the best gifts she had ever received. Although she traveled to many interesting places she always returned to Dubois, mentioning many times, there was no better place to live. As many of her friends and family can attest Amy Lou had an adventuresome spirit. We hope she is still flying in that hot air balloon today and traveling to many more adventures. She was preceded in death by her parents, Spencer and Marjorie Gard; spouse, Jack Alden Brazil; brother-in-law, Daniel Creitz. Survivors include her son, C. Shane Brazil, Dubois, WY; daughter-in-law, Becky Brazil, Dubois, WY; granddaughter, Melina A Blackwell, Wichita, KS; great grandchildren, Gabriel and Lillian Blackwell, Wichita, KS; sister-in-law, Jeanne Creitz; nephews, Danny Creitz (Shaila), Dennis Creitz (Monica); niece, Debbie Taiclet (Ken); many wonderful cousins and friends she dearly loved Memorial donations in lieu of flowers to the High Country Senior Center, 504 E Hays, Dubois, WY 82513 or Dubois VFW Auxiliary Post 10056, P.O. Box 88, Dubois, WY 82513.

On-line condolences for the family may be made at theDavisFuneralHome.com. Arrangements are under the direction of the Davis Funeral Home. Services will be held in July of 2019 at Dubois V.F.W. and will be announced when the date and time are scheduled.