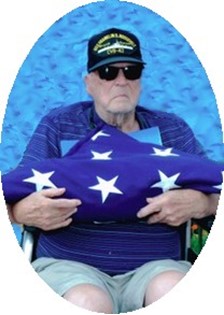 Guestbook 1
Roy Frederick Huenefeld, passed away peacefully on March 21, 2018 in the presence of his loving daughter and son-in-law at the age of 94. Military Funeral Honors will be 10:00 a.m., Saturday, June 8, 2019 at Mountain View Cemetery in Riverton, WY.

Roy was born on August 19, 1923, an identical twin, to his brother Ray on a farm in Calloway, NE, to sharecroppers, Arno "Pappy" Frederick Huenefeld & Verna "Momma" Huenefeld. In Roy's early years, the family moved to the Ainsworth Farm in Carpenter, WY, where the boys attended primary school. Before Roy was in high school, the family moved to, and ultimately settled in Riverton, WY, where the twins attended Pavilion High School, graduating in 1942.

On November 11, 1942, after graduating high school, Roy and his twin, Ray, enlisted in the United States Navy. Soon after enlisting, Roy and Ray were both stationed in Key West, FL where he met his future bride, and lifetime love, a native Key Wester (a Conch) named Fay Elizabeth Baker. Roy was eventually assigned to the crew of the Aircraft Carrier USS-FDR, CVB-42. Being an original crewmember, Roy had the distinct honor of being a "Plank Owner". Roy went on to marry Fay Elizabeth Baker. Roy and Fay had a daughter, Faye, and the family settled in Key West. After his military service concluded, Roy became a civil servant. When he retired from the civil service, he opened his own business, Roy's Lock Service. Many considered him the best locksmith to ever service the FL keys and Key West. Roy finally retired in 1982 back to Riverton WY to spend time with his parents, Arno and Verna. Those last years with his parents ended up being the last years of their lives. Arno passed away in 1984 and Verna in 1991. In 2008, Roy would move back to FL to live with his daughter, Faye, and her husband Pete in the Orlando area. He stayed there, with them, until his passing.

Roy loved travelling in his motor home around this great nation. He enjoyed playing his piano to entertain his friends and family. He had fun dancing to and singing his favorite songs, Polka, Ragtime, Big Band and 1950's Cuban songs. Roy was also a big fan of Disney World and could be seen there many times per year. He would visit Disney World so often that he became fast friends with many of the characters and cast members on Main Street, USA.

Roy lived a long, full, productive life and will be missed by all. Rest in Peace Poppa.