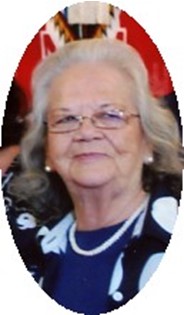 Dorothy Ada Denver was born on March 24, 1934 in Duchesne, UT to Elmer and Mary (Harris) Denver. She grew up in Duchesne and graduated from Altamont High School.

She was of the Catholic faith and also practiced the Native American ways.

Dorothy was a homemaker, a waitress, baker, sold Avon, and was a terrific seamstress and worked in a daycare.

She lived in many different places including, Fort Washakie, WY, Fort Hall, ID, Phoenix, AZ, and Orlando, FL for the last 30 years. She came home to Fort Washakie in November of 2018.

She belonged to the Veterans Auxiliary in Fort Duchesne, UT.

Dorothy was a musician and loved to play the guitar, banjo, ukulele, piano, accordion, and spoons. She had a beautiful signing voice also. When she was younger she was a barrel racer and still loved to ride horses.

She was preceded in death by her sons, Hilred Louis LeBeau and Bennie Earl LeBeau; daughter, Ronda Lee LeBeau; and nine of her siblings.