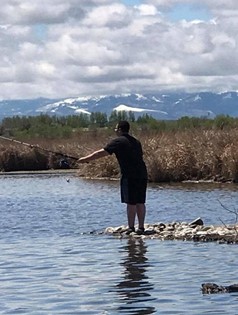 Guestbook 10
Carter Eugene Hughes, 16, of Riverton passed away on Saturday, June 1, 2019, in an automobile accident.

He was born on December 2, 2002 in Bemidji, MN to Tiffany Hughes. He attended school in Bemidji until he was twelve years old and then moved to Eagle Butte, SD with his Grandma and sister Gabby. He attended Cheyenne Eagle Butte middle school and high school until moving to Riverton, WY in October, 2017. He attended Riverton High School until January 2019 before moving to Pine Ridge, SD with his grandma where he attended Pine Ridge High School finishing his Sophomore year before moving back to Riverton on Friday, May 24, 2019.

He enjoyed the Riverton skate park, riding BMX bikes, power lifting where he recently reached his deadlift goal of 400lbs, and fishing with his friends where he believed in catch and release. He enjoyed being the master chef of his house and he could make a mean cup of tea. Carter knew something about everything, having a wealth of information on obscure topics. He loved listening to music, always made people feel happy, loved, and accepted; he truly brought joy to everybody he encountered, often thinking of others before himself.

Carter is also survived by his hu?ká (adopted) brother Hoksila Annis with whom he shared a very special bond and the Annis Family of Eagle Butte, SD. Carter and Hoksila met during Carter’s time in Eagle Butte and became fast friends. Their bond was one of the strongest that either would know in their lives. Together they set an example of friendship and brotherhood that we should all strive for.

Carter spent his last day doing what he loved, going to rummage sales with his grandma, and fishing with his best friend, Braedan Black.

He was preceded in death by his grandparents, Brian and Linda Hughes and cousins, Iziz and Yousra Mahmoud. A Celebration of Life to share stories about Carter will be held at the Riverton Skate Park, Saturday, June 8, 2019, from 1:00 pm to 3:00 pm.

Memorials may be made to the Central Wyoming Skate Association in care of Davis Funeral Home, 2203 West Main Street, Riverton, WY 82501.