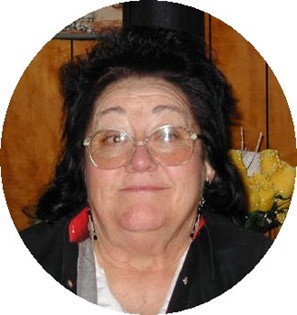 Guestbook 2
Funeral services for Mary L. "Sweetwater" Goodwin of Dubois will be at 10:30 a.m. Saturday, Aug. 23, at the Davis Funeral Home of Riverton. Interment will follow at Mountain View Cemetery in Riverton. Pastor Dave Case officiating. There will be a viewing from 5 to 7 p.m. Friday, Aug. 22, at the funeral home. Ms. Goodwin died on Tuesday, Aug. 19, 2008, at her home in Dubois at the age of 64. Mary Lee Goodwin was born on April 1, 1944, in Guthrie, Okla., the daughter of Horace "Jack" McKinley Goodwin and Margueriette Jeanne (Pierce) Goodwin. In 1960, she married Frank Weliever in Lander they had two sons Richard and Joe. They later divorced. She was a companion with Kenneth Neeman together they had one daughter, Michele. Her current companion was Dick Sloan. She lived in Wyoming most of her life. Ms. Goodwin was of the Catholic faith. She was a homemaker and her family said she enjoyed fishing, camping, hunting, collecting antiques and old bottles, rock hunting, singing, rodeos, and horses. Survivors include her companion, Dick Sloan of Dubois; sons, Joe Weliever and his wife Rita of Riverton, Richard Weliever and his wife Francine of Riverton; daughter, Michelle Hinz and her husband Gary of Superior, Neb; six grandchildren, Kali Allgood, Tami Fitz, Erika Weliever, Sarah Weliever, Gracie "Pudding Boots" Hinz, and Carlee "Buttons" Hinz; four great grandchildren, Breanna Allgood, Taya Allgood, Reneka Fitz, and Jenaya Fitz; her mother, Margueriette Goodwin of Riverton; sisters, Marie Hansen Brown of Greeley, Colo., Patricia Achee of Yuma, Ariz., Kay Mciver of Sheridan, and Ella French of Riverton; several nieces and nephews. She was preceded in death by her father, Jack Goodwin. On-line obituaries are available and condolences for the family may be made at: thedavisfuneralhome.com Services are under the direction of the Davis Funeral Home of Riverton.