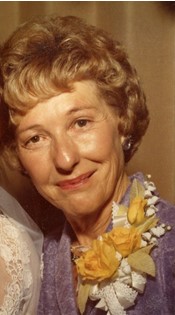 Guestbook 8
Bonnie Lee (Dietrich) Dalley died on Tuesday, July 3, 2019, at the home of her daughter and son-in-law, Dick and Debbie McClure. She was 92 years old. Services will be conducted by Bishop Brock Olsen, of the Aspen Park Ward, at the Church of Jesus Christ of Latter Day Saints, 4th and Elizabeth Drive in Riverton on Tuesday, July 9th, at 10:00AM. Burial to follow at Mountain View Cemetery. A viewing will be Monday, July 8th at the Davis Funeral Home, 2203 West Main in Riverton from 7:00—8:00PM.

Mrs. Dalley was born in Gering, Nebraska on February 1, 1927 to Melissa Iola (Jackson) and John Earl Dietrich. Her childhood years were spent in farming communities in Nebraska until 1939 when her family moved to an acreage in the Missouri Valley in Fremont County near Shoshoni, Wyoming. She was a graduate of Shoshoni High School, the class valedictorian in 1944. She is noted to have written the lyrics to the Shoshoni High School song. She extended her education in Denver at the Denver College of Business, learning the latest version of shorthand. She also worked hard on the family farm cultivating beans and sugar beets. She had the life experiences of the Great Depression and World War II. She resided in, and, loved the Fremont County area for over 80 years.

She dated Robert Curtis Dalley after the War, and, on June 6th, 1948 they were wed. Their union was solemnized for time and eternity in the Idaho Falls Temple of the Church of Jesus Christ of Latter Day Saints in 1964. They were married for 59 years when Bob died in 2008. She was an active member of the Church serving in Young Women’s, Relief Society and Sunday School.

Bob and Bonnie operated a farm north of Riverton for many years. Also, Bonnie was a mortgage loan processor for many years in Riverton. In her later years, she was devoted to being a Senior Companion for Wyoming Sr. Citizens, Inc.…she was older than several of her clients! Bonnie will be remembered for her remarkable cooking, baking, sewing, and being a loving and devoted mother and grandmother.