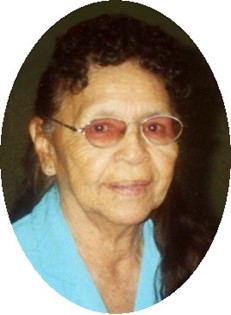 Guestbook 2
Alice Mary Moss, 77, of Arapahoe passed away at her home on Thursday, July 4, 2019. A rosary will be recited on Tuesday, July 9, 2019, at Great Plains Hall starting at 7:00 pm with the wake to follow at 20 East Great Plains Road. The funeral mass will be at 10:00 am on Wednesday, July 10, 2019, at St. Stephen’s Catholic Church, with Father Jim Heiser officiating. Burial will follow at Arapaho Catholic Cemetery in St. Stephens.

Alice Mary Spoonhunter was born on August 31, 1941 in Arapahoe, WY to Ward and Margaret (Gambler) Spoonhunter. She grew up on the Wind River Reservation, spending most of her time in Arapahoe. She attended Haskell Indian School in Lawrence. KS, graduating from there. She did attended Casper College for a time before returning to Arapahoe.

She was baptized into the Catholic Faith and was a member of St. Stephen’s Catholic Church.

On November 4, 1966 she married Leonard Ronald Moss, Sr. in Thermopolis, WY. On March 25, 1967 at St. Joseph’s Catholic Church in Ethete, Alice and Leonard were married and recognized by the Catholic Church.

She worked for the Wyoming Senior Citizens 55+ program for two years before she worked as a Case Worker for Department of Family Services for ten years.

She enjoyed beading, sewing, going to the casino, making flowers, and cooking, especially for Sun Dance.