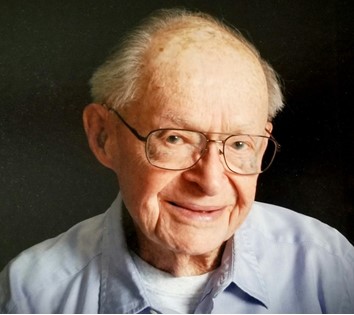 Chris “Vern” Nelsen, of Hudson, Wy passed away at Westward Heights Care Center, Lander, WY on Tuesday, July 9, 2019 at the age of 101. Vern lived a full life with many adventures and was loved by all and will be greatly missed.

Vern was born Chris Vernon Nelsen, May 4, 1918 to Chris Nelsen, Jr. and Ella (McVay) Nelsen. Vern’s dad was serving in World War I at the time for Vern’s birth and 6 weeks after his birth his mother, Ella (McVay) Nelsen passed away. Vern’s grandmother raised Vern in Arkansas until he was 4 years old. Chris Nelsen, Jr returned from WWI and settled in Winside, Nebraska with Vern and eventually remarried. Vern grew up during the difficult times of the depression and graduated from Winside High School in 1937.

Vern found work in western Nebraska and eastern Wyoming after high school. Next, Vern joined the CCC (Civil Conservation Corp) in Madison Nebraska until he enlisted in the Army in February 1941. He switched from the Engineers Division to the 1st Armored Division and in August 1941, they went on a 13 state maneuver that brought them back to Fort Knox Kentucky December 7, 1941. Instead of the discharge they had expected, they began preparations to be transported via the Queen Mary ship from New York to Scotland in May, 1942. They were ferried to Northern Ireland for training and sent to North Africa to help the Allied forces. They fought their way across northern Africa and then made their way through Italy. Vern had enough points when he reached Florence, so was sent back to the states May 22, 1945. In order to get back to Winside, Nebraska, he took a train, bus and the final 30 miles hitchhiked.

After the war, Vern met and married the love of his life, Anita Hintz. They moved to Wayne Nebraska where Vern became a mechanic and they had their first of 2 children, Linda, in 1949. In 1951, they moved to Norfolk, Nebraska where Vern was a certified Chevrolet Mechanic at the local dealership. Their second child Jullie, arrived in 1953. They moved several times over the years in and near Norfolk. Vern became a front-end auto alignment specialist and people came from all over northeast Nebraska to have Vern work on their vehicle. Vern was a dedicated worker and family man. He also, wanted balance of life. Vern and Anita enjoyed camping and traveling all over Nebraska and stayed connected with friends and family all over the western United States

In 1977, Vern and Anita moved to Dallas, TX. Vern worked with a nephew repairing refrigerators and then, worked for Desota High School as a custodian. When Vern and Anita retired, they moved to Cedar Creek Lake area of Texas and enjoyed boating, fishing and exploring. In 1998, they moved to Hudson, Wyoming and thoroughly enjoyed the new adventures that awaited them here. In December 2004, Anita passed away after 57 years of marriage. Beginning in 2005, at the age of 87, Vern diversified his traveling. Every year since 1945, Vern had attended his all school Winside High School class reunion, was a lifetime member of the VFW and Legion Post 252, Winside, Nebraska, so he continued his trips to Nebraska. Every year starting in 2005, Vern made a trip to see his oldest daughter, Linda, husband Art, and grandsons Kristopher and Allen Glaubitz. On his yearly Christmas adventures, the family participated in trips to San Diego (where he toured the Queen Mary ship that he made the voyage to Europe in 1945), New Orleans several times (WWII museum), a Mexican cruise, Arkansas, Missouri and many adventures within Texas. The highlight of Vern’s later years travel was the Wyoming Honor Flight trip to Washington, D.C. It was a great honor to have been included in that spectacular adventure.

Even after Vern had a severe broken arm in November 2018, he entered Westward Heights Rehab Center in Lander with the goal of returning to his home in Hudson. We worked diligently to improve his quality of life. Even though he was rehabilitating at Westward Heights with a broken arm, he snuck in trips to Nebraska and Texas. He was thrilled to be asked by his grandson, Kris and finance Claudia, to be the ring bearer at their wedding in Dallas, January 2018. So, Vern flew to Dallas to participate in the festivities. For his 100th birthday party, Vern was honored to have 100 people share in the festivities. Vern loved people and loved life. He always had a positive attitude and wanted to make sure that everyone else was doing well. His famous line was “May Your Day Get Better”. It wasn’t just a saying with Vern, he meant it.

Chris Vernon Nelsen was preceded in death by his parents, Chris Nelsen, Jr and Ella (McVay) Nelsen and his wife Anita (Hintz) Nelsen.

Memorials are to be given to the Legion/VFW Lander, Wyoming. Services will be held at Bethel Lutheran Church, 6th and Shoshoni, Lander, WY on August 10 at 2 p.m. Immediately following the service, there will be a military ceremony in the courtyard at the church. Coffee and snacks will follow in the Bethel Lutheran’s fellowship hall. Vern’s interment next to his dear wife, Anita will be in October with a graveside service in Winside Nebraska.