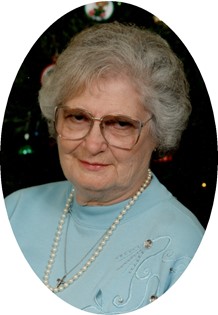 Mary Doris Werts was born on January 25, 1918 in Milford, MO to Clarence and Maude (Rector) Werts. She grew up in Lamar, MO with her three sisters and a brother. She graduated high school with the class of 1935. She attended Oklahoma State University for a couple years where she pursued a degree in teaching.

She travelled to Wyoming to visit family and met her future husband, Alfred “Dusty” Kealear and they wed in 1939. They had a daughter, Minnie, and lived in various places around Fremont County finally settling in Lander where Dusty became the Brand Inspector and Deputy Sheriff. Mary worked at various retail stores in Lander, including, McRae Drug, JC Penney, and Ben Franklin. Dusty passed away in 1962 and Mary remarried in 1965 to Eric Raecke. Together they ran the “Country Bottle Shop” liquor store in Lander. Eric passed away in 1979.

After her retirement in 1995, she lived at Sertoma in Riverton and worked there for several years as a Senior Companion.

Mary was a charter member of Fremont County Cowbells. She liked crocheting, reading, embroidery and quilting, but most of all she loved visiting and being with all her family especially her grandchildren and great-grandchildren.

Mary was of the Episcopal faith and attended church in Lander at Trinity Episcopal and Riverton at St. James Episcopal.

Memorials may be made to Westward Heights Care Center in care of Davis Funeral Home, 2203 West Main Street, Riverton, WY 82501.