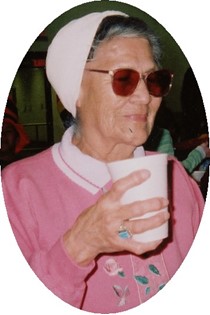 Rosa L. Niedo was born on June 18, 1930 to James Pingree and Alice (Leonard) Peahrora/Pingree. She was raised by her mother and stepfather, Pete Peahrora, after her biological father died in an accident prior to her birth. Ms. Niedo attended Countryman School in Fort Washakie. In 1963, she married Ray Niedo, who preceded her in death.

Ms. Niedo was a dedicated homemaker and mother for years before starting a career at the Chief Washakie Plunge ("Hot Springs") in Fort Washakie, where she eventually retired as manager.

An avid gardener, Ms. Niedo spent hours in the spring and summer in her yard pulling weeds and pruning flowers. She was known among family members for her bountiful strawberry patch that survived many raids by excited grandkids. A member of the Eastern Shoshone Tribe (hailing from the Moo-vi-gi-wah-nt clan), Ms. Niedo enjoyed making a variety of arts and crafts, particularly tribal crafts, including intricate beadwork and shawls. She also often attended powwows and, following her retirement, regularly participated in organized Tribal out-of-state trips with fellow elders to powwows and other events. Ms. Niedo also enjoyed traveling to the foothills and mountains surrounding Fort Washakie, her lifelong home, to pick native berries, which she used to make traditional Shoshone foods.

Family members describe Ms. Niedo as a devout Christian with a great sense of humor who loved her family and could make friends with people from all walks of life. She was particularly known for always having a smile on her face when visiting family members walked through the door.