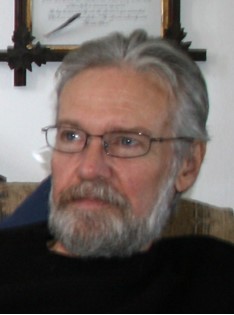 Guestbook 9
Joseph L. Johnston of Riverton died at his home in Riverton on Wednesday, Aug. 20, 2008, at the age of 61. Memorial services will be at 10 a.m. Saturday, Aug. 30, at the Davis Funeral Home of Riverton with Pastor David Magruder officiating. Joseph Loren Johnston was born on Jan. 7, 1947, in Portland, Oregon, the son of Francis Neil Johnston and Mildred (Gray) Johnston. After the death of his father, his mother married Edward R. McAuslan, Sr., in Rawlins, in 1958. He was graduated from Rawlins High School in 1966 and attended the University of Wyoming. He worked as a bookstore manager at St. Luke's Hospital in Denver for more than 20 years. He came to Riverton in 2007 and most recently had worked for the Wyoming Senior Citizens in Riverton. Mr. Johnston was baptized into the Presbyterian faith. He was an artist and painter, avid reader and a poet. Mr. Johnston is survived by his brother, Ed McAuslan and his wife Roni of Riverton; a sister, Cindy Hamilton of Kentucky. He was preceded in death by his parents; his step-father, Edward R. McAuslan, Sr. On-line obituaries are available and condolences for the family may be made at: thedavisfuneralhome.com Arrangements are by the Davis Funeral Home of Riverton.