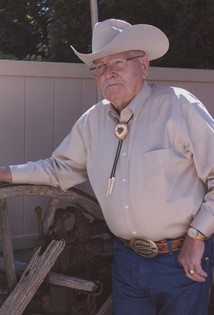 Guestbook 4
William “Bill” Eversole, 84 of Riverton went to be with his Lord and savior on Tuesday, July 23, 2019. He passed at his home with his loving family surrounding him. As were his wishes he will be cremated and a Celebration of Life will be held in the Spring of 2020.

William Francis Eversole, Jr. was born on May 4, 1935 in Rock Springs, WY to William Frances and Martha (Peasley) Eversole. He grew up with three brothers and one sister. At a young age the family moved to Lander, WY making their home on Baldwin Creek. He graduated from Fremont County Vocational High School in Lander with the class of 1953.

On May 21. 1954, Bill enlisted in the U.S. Marine Corps. He was a Sergeant and served in Japan for a year and half. He was honorably discharged on May 20, 1957. He was proud to have served his county and flew the US Flag every day to show his love of his country.

On June 30, 1956, after hitchhiking from California, he married his high school sweetheart, Ethel Charlotte Jones. They were married in Boulder, CO where Ethel’s family had moved. Together they had two daughters, Elizabeth and Audrey. They shared over 63 years together through thick and thin.

Bill attended the University of Wyoming from 1957 to1961, and later took more classes at CWC in Riverton.

Bill started working for the State of Wyoming Game and Fish in 1961. He was first stationed as the Warden in Kaycee before moving to Riverton where he was stationed until his retirement in 1986. While in Laramie he worked as a District Special covering Laramie, Medicine Bow and Sundance. He was the first Warden in the State of Wyoming to become an Enforcement Specialist. He traveled around the state enforcing game and fish codes and many times was called to court to testify against a violator, at times he even traveled out of state to testify. After he started this position, now there numerous Enforcement Specialist around the state. The last position he held was the District Supervisor in Lander.

After retirement, Bill and Ethel raised a small herd of cattle and their horses on their place in Missouri Valley. After 30 years on their “ranch” he and Ethel moved into Riverton. It was quite a change from the serenity and natural sounds to move into town with all the noise. He made the best of it mowing and hand trimming his lawn up until a couple weeks ago. He enjoyed working in his shop. He had a lot of friends that he visited with and kept up on the current events of Riverton and Fremont County.

He was of the Christian faith and attended the Lighthouse Bible Church with his family. Bill was a very involved Mason and Shriner. He was first initiated on February 4, 1964 into the Hanna Lodge 50 in Medicine Bow. Over the years he won numerous awards for being a Mason and Shriner. He held many offices in the Blue Lodge, Grand Lodge and Shrine. He was also a member of the Buckskin Horse Patrol out of the Sheridan Shrine Club. His proudest accomplishment was that he was elected as the Potentate in 2007 when the Kalif Shrine celebrated its 100 year anniversary. He took pride in being a Mason and Shriner and was always helping in many different areas.

He was preceded in death by his parents, William and Martha Eversole; brother, Donald Eversole; parents-in-law, Burette and Rmelda Jones and sister-in-law, Katha Jones Davis.

Memorials may be made to The Kalif Shrine or Paws for Life in Riverton, in care of Davis Funeral Home, 2203 West Main Street, Riverton, WY 82501.