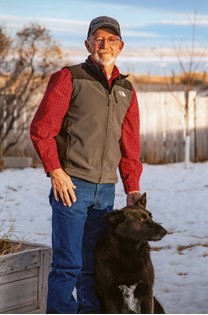 
Larry Harmon Baker was born in Emporia, Kansas on August 8, 1949, the only child of Harmon H. Baker and Rosalie (McKittrick) Baker. He passed away on August 16, 2019 in Salt Lake City, Utah at Silverado Hospice.

When Larry was two, the family of three moved to Riverton, Wyoming. They had planned on moving to Seattle, but stopped in the Wind River Valley and decided to stay. He lived in the valley for the rest of his life.

Larry attended several schools as a youngster as his father ran a crane in locations in Wyoming, Colorado, and South Dakota. He attended Jefferson Elementary in Riverton, Wyoming and later the family moved to Morton, Wyoming where he attended school through graduation in 1967.

In high school, Larry participated in football, basketball, and track. He was a member of the high school band, choir and FFA. He liked fast cars and had several Mustangs and a GTO.

Larry met the love of his life in 1962. Larry and his mom, Rosalie were helping Claudine and Dave Gardner cut seed potatoes for planting when Claudine’s younger sister, Patti Jo Stoll came to visit. This was the beginning of a beautiful, life-long love story. The young couple married on December 27, 1969. To this union two daughters were born; Tania in 1972 and Robyn in 1976.

Larry attended Casper College, then joined the Army National Guard in 1969 which he was a member of for six years.

Larry worked for Empire and Osborne Trucking as a mechanic and truck driver. He also worked for Valley Implement for 25 years, and then worked as a mechanic for Midvale Irrigation until his retirement in December 2013. He had also been a member of the Morton/Kinnear Volunteer Fire Department.

As a father, Larry was second to none. He taught his girls how to fish, shoot a gun, drive, and insisted on teaching them how to change their own tires, check their oil and to keep their gas tanks half full. Larry taught the girls to shoot baskets. Many hours of H-O-R-S-E were played and he said, “If you aren’t fouling, you aren’t playing hard enough.” He followed his daughters’ and granchildren’s activities from athletic events to choir and band concerts and was proud of them all.

Larry’s greatest accomplishments were as a husband and father and later, a wonderful grandpa. He instilled in his children and grandchildren his love of mountains, sage hills, and clear streams of the Wind Rivers. He would often be seen driving (tooling around) on dirt roads in the area looking to rid the area of coyotes and prairie dogs. He also ran a trap line on Five Mile for several years and would sell the hides to Jake Korell, who he respected and admired as an old time mountain man. His peace was found in the mountains, especially on Lava Mountain, Sheridan Creek, Warm Springs, East Fork, and Long Creek above Dubois. He also enjoyed the high plains sage hills of Beaver Rim, Long Creek, Crook’s Mountain, and Green Mountain. He and Patti Jo also loved riding in the hills on their four-wheelers and later the side by side.

Larry started hunting rabbits as a child and loved to look for antelope, deer, elk, sage chickens, pheasants, and Hungarian partridges. He killed a mountain sheep in 1989 and was very proud of that accomplishment. He also was an outstanding fisherman and spent many hours on Bull Lake with his friends, family, and wife.

Larry will be known for his dimpled smile, infectious laugh, and love for the outdoors. He felt he was close to God when he was in nature. He was kind, gentle, and loyal. He took pride in taking care of his family. He loved animals and had several dogs that he found great companionship with including Chocolate, Max, Bear, and most recently, Ollie.

In lieu of flowers, please make donations to the Alzheimer’s Association, in care of the Davis Funeral Home, 2203 W. Main Street, Riverton, WY 82501.