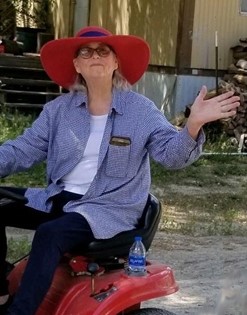 Guestbook 1
Norma Jean (Wyatt) Skinner, better known to some as Jeanie, but to her family as Nana, passed away in her home on the evening of Tuesday, August 20th, 2019 at the age of 74.

She married Billy D. Skinner on July 6th, 1965 and together they had four children; Clark, Marta, Marla, and Mark. The couple lived in Bakersfield until 2013 when they moved to Riverton, Wyoming.

Nana put her family above all else and was known to dote on more than her fair share of children. No one went hungry at Nana and Papa's house. She had a love of cooking, sewing, and making things for the people she loved. She was always willing to help, especially if a house needed cleaning, decorating, or furnishing. She loved shopping for antique furniture and had a tremendous collection of teapots and water jugs. She was a caretaker at heart. She cared not only for her extended family and friends but also for the countless children for whom she prepared meals during her twenty-plus year career as a school cook. Nana worked at Buena Vista Elementary and Louden Elementary in Bakersfield, CA and Riverton High School in Riverton, WY.

Jeanie was preceded in death by her parents, Calvin and Ruth; her brothers, Wayne, Herman, Floyd, James, and Jerald; her sister, Earlene, and daughter, Marta.

She is survived by her husband, Bill: her sister, Barbara; her brother, Wendell; her children, Clark, Marla, and Mark; nine grandchildren; thirteen great-grandchildren; and numerous nieces, nephews, and cousins. We will always remember her as one of the most loving, hard-working people to ever grace the earth.

We love you so much, Nana, and you will be greatly missed.

A small family gathering will be held to celebrate Nana's life, but there will be no formal services. Cards and flowers can be sent to 2 Poff Ln, Riverton, WY 82501.