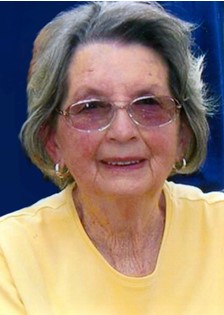 Shirley Claire Gillespie was born on October 8, 1929 in McCook, NE to Donald Alonzo and Rosa Dora Katherine (Urich) Gillespie. The family moved to Sterling, CO where she attended school and graduated.

On May 9, 1948 she married Donald Arthur Irelan in Sterling, CO. Together they had three daughters. Terry, Pat, and Mari. The family lived in many different areas including, Mitchell, SD, Lamar, CO, Craig, CO, Shoshoni, WY, Plentywood, MT and finally settling in Thermopolis, WY.

She was a member of the Evangelical United Brethern Church of Sterling, CO.

Shirley worked at Woolworths, as a legal secretary, and owned The Cellar Antique Store with her daughter, Terry and The Wherehouse, which was a book and music store.

She was a Brownie and Girl Scout Leader, served on the Legion Town and Country Board, belonged to the Hospital Auxiliary and enjoyed working in the hospital gift shop.

Shirley loved to hunt, fish, play golf, and her organ, and many years of quilting. Her last year she loved doing puzzles and Word Search books.

Memorials may be made to the Irelan Memorial Nursing Scholarship in care of Davis Funeral Home, 2203 West Main Street, Riverton, WY 82501.