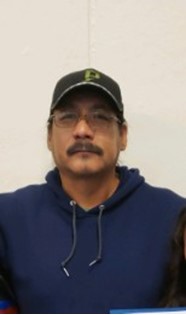 Merlin George Black was born on June 7, 1975 in Thermopolis, WY to Lemuel B. Black Sr. and Priscilla (Oldman) Black. He grew up in the Arapahoe area and attended school at St. Stephen’s. He graduated as the valedictorian of his class in 1993.

He lived in Corona, CA from 1995-1996 where he worked for the Department of Transportation. He then returned to the Arapahoe area and remained there until his passing. He was a cook and had worked at the Wind River Casino, JB’s, and Trailhead.

Merlin enjoyed playing his drums, going to yard sales, sweats, playing cards, and listening to music. He loved being around his grandchildren, children, nieces, and nephews. He played on the Fremont County Dart League and had placed 2nd.

He was preceded in death by his mother, Priscilla Oldman-Black.