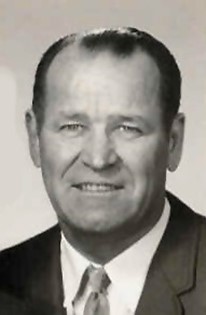 Guestbook 0
A Mass of Christian burial for LeRoy W. “Roy” Graham, 96, will be at 2:00 p.m., Thursday, Sept. 4, 2008, at St. Margaret’s Catholic Church with the Rev. Andrew Duncan as celebrant. A rosary will be recited at 7:00 p.m., on Wednesday, Sept. 3, 2008 at Davis Funeral Home. Graveside services and military rites will follow the mass at Mountain View Cemetery. He died on Aug. 30, 2008, at Shepherd of the Valley Care Center in Casper. He was born in Lincoln, Nebraska on Dec. 29, 1911, the son of Alric S. and Kathryn (Boland) Graham. At age 6, he moved to Greybull with his family. In 1920 they moved to Kirby and owned Graham Dairy. He and his brother, Lefty, delivered milk. In 1938 he and his father purchased the Blue Eagle Bar in Thermopolis. In 1942, he joined the U.S. Army Air Force. After basic training at Ft. Richardson, Alaska, he joined the 250th Coast Artillery in the Aleutian Island (Adak), serving as battalion dispatcher. In 1943 he joined the 42nd Troop Carrier Squadron. He was awarded the American Theatre Ribbon, Asiatic-Pacific Theatre Bronze Star, Good Conduct Medal, and World War II Victory Medal. On July 4, 1944 he married Redell Weisheim of Riverton in Columbus, Georgia while stationed at Lawson Field as supply sergeant for the 811th Army Air Force Base Unit. She passed away Sept. 8, 2002, after 57 years of marriage. In 1946, the couple purchased Graham’s Bar in Riverton, which they owned until 1961. They owned commercial and rental property in Riverton and were partners in a cattle ranch at Little Grass Creek with their good friend Dr. Dale Ashbaugh. He loved visiting with family and friends, fishing, hunting, traveling and a good joke. The couple traveled to all 50 states and several foreign countries. He was a gentleman and kept his sense of humor until the very end. He was a member of St. Margaret’s Catholic Church, 76-year member of Knights of Columbus, and life member of Veterans of Foreign Wars Post 3628 in Riverton. He is survived by nephews, A. Thomas Graham, Jr. and Graham West of Casper; and Kevin West of Reunion, Colorado; nieces, Ann Robinson of Casper and Patty Page of Aurora, Colorado; sister-in-law, Joann Weisheim and special friend, Viola Hill of Riverton; and several grand and great-grand nieces and nephews. He was preceded in death by his wife, Redell, his parents; two brothers, A. T. “Lefty” Graham and Verne Graham; one sister, Lillian West; and three nephews. Davis Funeral home is handling arrangements. Memorials may be sent to St. Margaret’s Catholic Church, 622 E. Park Ave., Riverton, WY 82501. On-line obituaries are available and condolences for the family may be made at: thedavisfuneralhome.com.