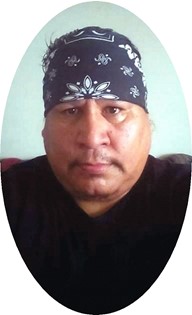 Guestbook 1
Funeral services for Clarence “Auggie” Leonard Behan, Jr., 48, will be held at 10:00 a.m., Wednesday, October 2, 2019 at St. Stephen’s Catholic Church with Father Sebastian Prakash officiating. Interment will follow at the Arapaho Catholic Cemetery. A Rosary will be recited at 7:00 p.m., Tuesday, October 1st at Great Plains Hall with a wake to follow.

Mr. Behan passed away on September 25, 2019 at the Wyoming Medical Center in Casper, Wy.

He was born on May 26, 1971 in Thermopolis, Wy, son of Clarence Leonard Behan, Sr. and Myra Louise (Spotted Elk) Behan.

Auggie was baptized into the Catholic faith but also belonged to the Native American Church. He was a Sundancer as well as being a member of the American Legion Post #84.

Auggie loved to go fishing with his children, nieces and nephews. He treasured these kids and loved to spoil them. He also enjoyed going to Bull Lake with his brother, Wilbur, as well as spending time in the mountains with him. He loved to just get in the van and go cruising and listening to the radio. Auggie loved his music and watching movies of all kids. Mr. Behan loved spending time with his kids, Dakota, Kayla and Lynette and his niece, Diamond “Nana”.

He was preceded in death by his father, Clarence L. Behan, Sr.; Stuart and Doris Oldman, Harison and Jennitte Caldwell, Russell Caldwell and Even Caldwell.