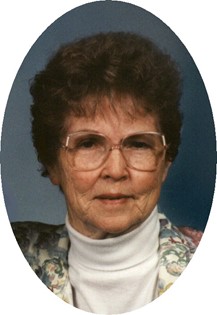 Guestbook 2
Long-time Riverton resident Muriel L. "Babe" Beckers died on Wednesday, Sept. 3, 2008, at the age of 88. She had been a resident of Westward Heights Care Center in Lander for the past year and a half. Memorial services will be at 11 a.m. on Saturday, Sept. 6, at St. John's Lutheran Church in Riverton. Pastor Mike Johnson will officiate. Muriel Luellen Walker was born in Hamil, S.D., on April 13, 1920, the daughter of Dick and Sylvia Walker of Dallas, S.D. She had four sisters and three brothers. She was graduated from Dallas High School and married Nicholas "Nick" Beckers in Gregory, S.D., in 1939. The couple enjoyed dancing throughout more than 50 years of marriage. They had four children -- Dennis, Sandy, Darla, and Marty. The family moved to Riverton from South Dakota in 1965, when Mr. Beckers started working for Norris Ford. Mrs. Beckers worked as a certified nursing assistant and ward clerk in hospitals in South Dakota and then both hospitals in Riverton. Her family said she was also an artist and loved oil painting, taking many college courses in painting and selling many pictures throughout the state. They said one of her favorite things was the annual quick-draw. They said she enjoyed traveling to parts of Wyoming to paint with fellow artists. She played the piano by ear and had special feelings for little children and little animals. After her retirement, Mrs. Beckers worked as a foster grandparent at Jefferson and Lincoln schools for about 20 years. She was a member of the Riverton Artists' Guild, the Ladies Auxiliary to VFW Post 3628, and the Disabled American Veterans Auxiliary. Survivors include daughters, Sandy Beckers of Ridgecrest, Calif., Darla Hunter and husband Roger of Riverton; a son, Marty Beckers and his wife Wendy of Riverton; daughter-in-law, Wendy Beckers of Texas; 13 grandchildren, Teresa Lloyd and husband James, Joyce Lybarger and husband Harold, Julie Gilbert and husband Carlos, Debra Keys and husband Bill, all of California, Michele Costello and husband Shane of Pinedale, Jeff Hunter and wife Michelle of Galord, Mich., Ron Hunter and wife Michelle of New Hampshire, Ray Hunter of South Carolina, Jamie Beckers, Amy Christenson, Crystal Beckers, Jenny Hall and husband Don, Delores Beckers, of Riverton, Lori Beckers of Lincoln, Neb.; 32 great grandchildren; a sister, Edlyn of Colorado; two brothers, Lee of Texas and Jim of Arizona; sister-in-law, Helen Keever of Madison, S.D.; many nieces, nephews, former co-workers and friends. She was preceded in death by her husband, Nick; a son, Dennis; brother, Charles; three sisters, Sybil, Maurene Evelyn, and Mildred Earl, and a grandson, Brett Michael. On-line obituaries are available and condolences for the family may be made at: thedavisfuneralhome.com Services are under the direction of the Davis Funeral Home of Riverton.