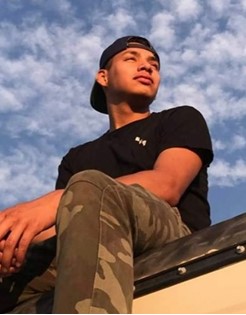 Joshua Treyell Friday was born on June 1, 1999 in Riverton, WY to Paul Warren, Jr. and Lindsey Lorraine Friday. His Native American name was Sacred Badger (Beteen Woh'oo'), He spent most of his younger years in Casper, WY living with his Aunt Vanessa and attending grade school and Dean Morgan Junior High School there. For his high school years he went to boarding school in Salem, Oregon, Chemawa High School. While in Oregon he lived with the Barela and Barney families. He recently returned to Wyoming and lived in the Riverton with his family.

In high school he was active in all of the sports, basketball, track, football, and cross country. He was very good at any sport he was in. He played in many basketball tournaments.

Josh loved hanging out with his family and friends. And above all he loved his daughter, Armani, dearly.

He was preceded in death by his mother, Lindsey Lorraine Friday; Grandfather James Goodman.