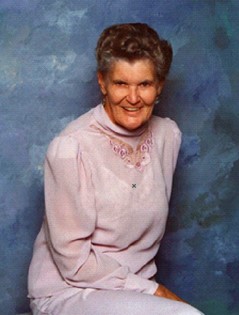 Guestbook 6
Evelyn Bernice Ellis Jackman was born on a cold January morning in 1922 in Sage, Wyoming. She attended school through high school in Kemmerer, Wyoming.

After graduating from Kemmerer High School she moved to Ogden, UT where she was employed by the Department of Defense working as a cryptographer and codebreaker during World War II.

On June 18, 1951 she married Kenneth Levi (Slim) Jackman. They lived in Granger, Wyoming until 1958. They moved to Green River, then to Lander, and then to Riverton where they remained for many years. Family rumor is that Slim sold his Tennesee Walking Horse to purchase her wedding ring. He loved that horse, but he loved and valued her even more.

Evelyn was primarily a stay-at-home mother, working part-time at a variety of jobs while raising her children: Paul Howard, Karl Eugene, Kim (Green), and Leslie Jean (Hawkins). After the death of Slim, Evelyn remained in Riverton where she worked part time as a Foster Grandmother in the Riverton elementary schools where she was fondly called Gramma J. She worked at the Riverton Senior Center for a number of years. She practiced her hobbies which included canning and preserving, oil painting and various arts and crafts.

She is survived by her four children and eight grandchildren.