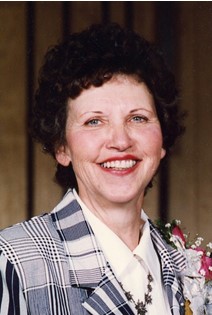 
Patricia “Patti” Anderson, 85, of Riverton passed away on Tuesday, November 26, 2019 at the Wind River Rehabilitation and Care Center. A funeral service will be held at Davis Funeral Home on Monday, December 2, 2019, at 2:00 PM with burial to follow at Mountain View Cemetery.

Patricia Anne Jons was born on April 1, 1934 in Pinedale, Wyoming to Henry Brumm and Mary Josephine (Irby) Jons. Patti was fourteen when her mother moved the family of four girls to Riverton after her father’s untimely death. She graduated from Riverton High School with the class of 1953. She attended the University of Wyoming for two years and was a proud member of Pi Beta Phi sorority.

Patti worked as a civilian nurse with the U.S. military for most of her adult life. It was this career that took her to many areas of the country including Alaska, Arkansas, Oregon, and Louisiana. She moved back to Riverton in the late 1970s with her husband, William Wayne Mund, a retiree from the U.S. Air Force. William passed away on July 23, 1989.

Patti became very involved in the community. The list of associations to which she devoted her time include the Daughters of the American Revolution, Society of Mayflower Descendants, Wyoming Historical Society, Riverton Museum Association, and the Oregon-California Trail Association. She was also active politically and would attend city council and county commissioner meetings.

Patti married Gerald E. Anderson on January 6, 1995 in Riverton. The couple enjoyed traveling, alone, and with family. Gerald’s family was immediately fond of Patti, and his grandchildren refer to her as Grandma. One of their favorite trips was the annual reunions for the crew of the USS Drew, an attack transport that Gerald served on during World War 2. In total, the couple shared fourteen wonderful years together before Gerald passed on November 7, 2009.

Her interests included genealogy, reading, puzzles, and gardening. Of these interests, genealogy was her greatest love, and she had traced her family back thirteen generations. Patti always had a smile and enjoyed talking to anyone she met about their interests.

She was preceded in death by her parents, Henry and Mary Jons; sisters, Josephine King, and Eileen Coursey; husbands, William Wayne Mund, and Gerald E. Anderson; and her companion, Palmer Mattson, III.

Memorials may be made to the Riverton Museum Association in care of Davis Funeral Home, 2203 West Main Street, Riverton, WY 82501.