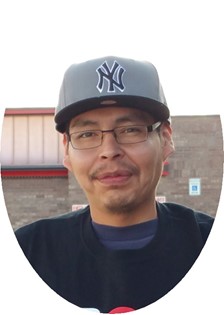 Michael Tyron Fletcher was born on October 28th, 1980 in Lander Wyoming to Grant Allen Fletcher Sr and Karen Lee Sioux. Michael passed on November 25th, 2019 in Casper Wyoming. He was raised in Arapahoe Wyoming by his mother Karen and stepfather Daniel Lee C’Hair. Michael attended Arapahoe and St. Stephen’s schools. Michael moved to Montana when he was 16 to attend Trapper Creek Job Corps. While there he received his High School Equivalency and a Certificate in Masonry Skills. Michael furthered his education at Montana State in Bozeman, MT. Michael then moved to Denver, CO to work on his trade in construction of buildings and roads in the Denver area. Michael moved to Geary, OK to help with the care of his grandparents, John and Wilma Fletcher, Sr. While in Geary, Michael started working at Lucky Star Casino in Concho. There he worked as a housekeeping/maintenance worker and then Supervisor. On June 3rd 2005, Michael married Jeani Marie Rasbeary. They had a home in Geary until moving to El Reno, OK in 2007. On May 12th 2008, Michael and Jeani welcomed their son, Marcellus James Fletcher. During early 2009, Michael and Jeani suffered the loss of 2 babies. They decided to move their family back to Arapahoe, Wyoming in August 2009. Michael became employed by the Wind River Hotel and Casino. Michael started as housekeeping at 789 Truck Stop before being promoted to Supervisor of the Hotel Housekeeping crew and the set up of the Hotel for Wind River Casino. Michael continued to work for the casino until 2014 when he applied and became and Enrollment Technician for the Northern Arapaho Tribes Enrollment Department. Michael thoroughly enjoyed working with his “enrollment ladies” and assisting Tribal members. In following his love for helping all those he was able, Michael transferred to the Northern Arapaho TANF department as a transportation driver for families in need. When the Northern Arapaho Tribe took over the operation of the Arapahoe Clinic, Michael saw his chance to help assist even more community members that could use him. Michael became the Transportation Supervisor of Wind River Family and Community Health Care where he had a love for assisting community members to various appointments they may have for their health care needs. Michael really enjoyed the stories of his elder passengers which often requested him by name. A joy for him and his family was when the children Michael assisted with would run up to him out in public and give him a hug or just start telling all kinds of stories of events that happened since they last seen him. Michael had a true passion for helping children. Michael took part in the Great Plains Head Start Parent Committee, St. Stephen’s Parent Committee, St. Stephens’s JOM Committee, and the Easter Pow-wow Committee. Michael enjoyed drawing, giving and receiving tattoos, working on cars, taking care of family and children in need, and was known as an avid social box bidder at masquerades. If any event involved fundraising for the “Kids” he was right, there making sure to help them reach their goals. Michael was also part of a special brotherhood of cousins known in Okalhoma as the Native Kingz. He loved his brothers and their families with everything he had and would help in anyway possible.