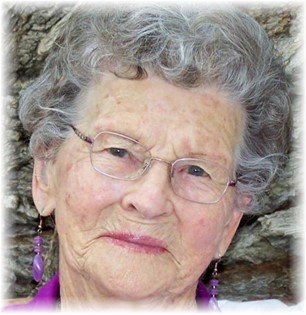 Velma Ann Bryant was born on September 6, 1923 in Lexington, NE to John William and Eva Ruth (Strohmyer) Brant. She grew up in Nebraska during the depression and attended school there with her two sisters and two brothers.

She was of the Protestant faith and enjoyed church services.

On July 15, 1941 she married Clayton Eugene Lobdell in Kimball, NE. They moved to Lexington, NE when Clayton went to World War II. When Clayton returned in 1945 from the war, they lived in Lexington, NE until 1949. Then the family moved to Riverton and eventually made their home on Burma Road. After retirement, they spent winters in Havasu Springs, AZ for ten years before Clayton’s health made it difficult to travel. In 1997 after Clayton’s passing, Velma moved into Riverton, where she lived until her passing.

Velma loved her family, friends, and country living. While living in the country she had a huge garden and loved making deserts. While in Arizona she enjoyed fishing and enjoyed the warm weather.